We have a wide variety of gamers who come to Ignite. Each day we see our PC and console stations constantly filled by both casual and competitive gamers. Some gamers are dedicated to mastering their craft at one game, some play whatever they’re in the mood for, and others are trying out games for the first time. Some customers are even taking a crack at gaming in general for the first time! We love to see the variety of gamers playing alongside each other, showcasing the gaming community at its best.

The same absolutely rings true for our staff! Some of our staff have been with Ignite for forever, having spent many after school hours as loyal customers chatting with the staff and downing Swags. Others found us online or through friends and started their friendship with Ignite as staff members. No matter how they came to join our team, they’re here and we love what they bring to Ignite. Some of them are veteran gamers who love to be right in the middle of the competition, while some like to play more casually. At Ignite, we like to celebrate both the casual and competitive gamers, so no matter what you play, you’ll find your place with us!

To really push this idea and not get too cheesy with the love we have for you guys, we’re going to have a recurring diary-like entry once a month to showcase how awesome having a variety of gamers creates a really cool and welcoming atmosphere. This month, we have long-time gamer, Ignite customer, and new Snack Bar staff member Fluffy introducing casual gamer and Ignite’s Social Media Coordinator, Alisha, to the original Halo (from the recently released Master Chief Collection). In this entry, Fluffy and Alisha will give you a little bit of play-by-play and some personal thoughts on what it was like to experience the game together! Fluffy has played and finished all of the Halo games and Alisha never plays any First Person Shooters (FPS), so Halo is extremely foreign to her.

Fluffy: I was watching Alisha the whole time. I’m used to playing with people who have played Halo before, so no one pays attention to the cinematic. She was so intensely concentrated on understanding everything. It was cool to see her show the interest that my friends and I had back when it first came out.

Alisha: Fluffy told me about Halo’s story line a couple weeks ago, but he tried to tell me about all the games at once, so I had to focus in order to know what was happening!

Right after the opening scene, the players have to navigate the ship, called “The Pillar of Autumn”, to find the bridge where they receive their first orders and weapons from Captain Keyes. Fluffy lingered behind Alisha, letting her try to find out where to go. She was running in circles quite a bit.

“Ughhh! How do we get to the bridge?”

“…There are signs on the floor.”

Fluffy: I had very little hope for Alisha at the start, haha. She was running around barely able to use the controls and totally ignoring the very obvious signs telling us exactly where to go. I just let her run around…

Alisha: I don’t play console games, so I was pathetic in my attempts to move and look around at the same time. Logic wasn’t an option, haha!

Fluffy was supporting Alisha in her attempts to learn a new game, but she seemed (comically) hopeless! After Fluffy pointed out the signs on the floor, our duo made it to the bridge. Where Fluffy’s favorite moment of the night happened.

Fluffy: Oh, dude, this was SO good. So funny, oh my god. So Alisha runs onto the bridge, we FINALLY made it after she used her freakin’ brain, and immediately runs into a guy and says,

The timing was perfect and I almost missed her finding the actual Captain Keyes from laughing.

Our team then watched a cinematic with Captain Keyes and received an unloaded pistol with the instruction to “Find more ammo around the ship.”

“Are you kidding me? You’re gonna give us a pistol without any bullets?! Wow, thanks Captain. That’s super productive.”

Alisha: Dude, seriously. Who says “Go protect the ship!” and then gives you an empty gun? Send people on missions ill equipped….THAT’S HOW YOU GET DEAD PEOPLE.

Fluffy: Alisha was too busy criticizing the Captain to realize that we were going to get ammo in about 3…2…1…

Alisha turned to look at the screen just as the animation of her new pistol loaded and set itself up in her sight line.

Fluffy: She literally freaked out at her own gun. I made a bet with myself at how soon and how many times she would die. Hint: Very soon and a lot.

Alisha regained her calm and the pair went off through the rest of the ship. Alisha managed to pick up a plasma pistol, how she did not know, and fell in love with it.

Fluffy: She literally liked the weakest weapon in the game…I pretty much gave up all hope.

The duo continued running around the ship, and Alisha was somewhat successful at killing the Covenant aliens. Though she still didn’t have a good grasp of the Xbox One controls.

Alisha: I was trying to look and run at the same time, but my fingers were doing all sorts of funky things. It felt counter-intuitive to move the joystick up when I wanted to look down. I couldn’t move and shoot, because I couldn’t move and aim, so I was taking a lot of damage. I wasn’t dying!! But I definitely wasn’t doing super great, either.

Fluffy: She started running into people and blaming them for being in her way, haha.

Alisha: SOME OF THEM WERE, THANK YOU VERY MUCH.

Fluffy: Whatever, nerd! ANYWAY, after she ran in to a few more guys (and blamed them), I asked her to show me what she was doing with the controls to see if I could help her. Turns out she’s awesome like me and needed inverted controls!! We are a special few, we inverted controls people!

Alisha: It makes SO MUCH MORE SENSE. Oh my god, I could look and move at the same time! I was still a little off because I’m clueless on consoles, but it was much more comfortable than before. Seriously, if you’re new to consoles and it’s not working out, test out inverted. Life. Saver.

Once Alisha found the right setting for her controller, the two got back into the mission. Alisha was taking slightly less damage now that she could move and shoot and she was doing more damage by being able to actually aim at the aliens. Things got tough again in the ship’s crawl spaces, though.

Fluffy: Another hilarious Alisha moment…she cannot crouch. I mean, she physically can as a person, because she kept crouching in her seat when attempting to crouch in the game, but she could not get the crouch function to work.

Alisha: Pfffttt, no.
…maybe. I gotta put my acting degree to use somehow!

Fluffy: Is your acting degree the reason why you make up names for the Grunts and Elites?

Fluffy: Haha! The “short people” and the “tall people”…

Alisha: Oh! The aliens! Well you never told me what they were called and neither did Captain Useless. I had to call ’em like I see ’em!

Short people, aka Grunts. Image from the Halo CE wikia. 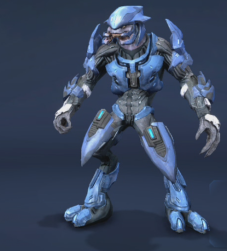 Tall people, aka Elites. Image from the Halo CE wikia.

Our duo continued on killing all the “short people” and “tall people” they came across. By the end of the first mission, Fluffy was shocked…

Fluffy: She was doing better than I thought! I bet myself that she would die a lot and she hadn’t died at all in the first mission. I had to change that. However, right as I thought that, she fell off a cliff.

Indeed, Alisha had fallen off a cliff.

Alisha: I didn’t realize there would be planes attacking us. FROM THE SKY. I knew the ground wasn’t level and I should be cautious (I have a habit of falling off cliffs and edges in the PC game Guild Wars 2…), but I felt like I was bending my head all the way back in order to shoot the planes. Clearly, I wasn’t bending it far ENOUGH back because I didn’t see the cliff and I backed right off of it.

Fluffy: She survived a Covenant assault on the ship, but she walked straight off a cliff. I just…oh man. It was too good. I had to make sure she experienced virtual death a lot more.

Our duo headed into an underground compound, after killing several more grunts and elites, in a vehicle found outside. Fluffy was at the wheel and Alisha manned the gun. They made it inside and Fluffy told Alisha to go look around.

Fluffy: We were in the underground leverage area…

Alisha: It’s basically a big silver and blue-ish room with a bridge…kinda Star Wars-y? I don’t know if that makes sense, but as soon as we got in there it made me think of Star Wars. I was looking around expecting some aliens to pop out, but nothing was happening. I thought maybe a cinematic was about to happen…?

Fluffy: My time had come! Anyone who has played Halo before knows there’s a glass panel in the floor to the left as soon as you enter the underground area. I told Alisha to go stand on it and look down through the floor.

Alisha went over to the glass floor and looked down, trusting her companion.

Alisha: Then he SHOT THE FLOOR.

Fluffy shot the glass panel Alisha was standing on.

Fluffy: Hahaha!! It was THE best. She was looking down and then BOOM. Dead.

Alisha: I was doing so well with the whole not dying thing after the cliff incident and he has THE NERVE to kill me?

Fluffy: It was the greatest. I killed her a couple more times throughout the mission after that, too.

Alisha: A COUPLE?! More like SEVEN more times. Of the NINE deaths I had in the 2nd mission, EIGHT of them were your doing! Moral of the story kids, come have fun and play at Ignite where everyone is supportive, except Fluffy!

Fluffy: Nahhh c’mon. You love me!

Alisha: Alright, fine. Moral of the story is friends are awesome…but can’t be trusted!

END OF NOOB DIARIES: DAY ONE

Even though it is obvious Fluffy can’t be trusted, Alisha had a great time learning a new game! In last week’s blog, Ignite Co-Owner and Operator, Sam, wrote a blog about reasons why people should come to a LAN center to play games as opposed to staying home and the biggest point was the people! Whether they’re new gamers or seasoned pros, Ignite cultivates an environment of encouragement and fun! Our staff and our customers come in at all skill levels and there is no reason to be afraid! It’s okay to not be good at a game, you can still have fun while learning. So, gamers new and old, come pick up where you left off on your favorite game, or come in and try something new! We’re ready for you!

Want to put some faces to those names? Here are Fluffy and Alisha:

Fluffy looking fluffy in the Snack Bar where he CAN’T KILL ANYONE.

Let us know in the comments below!