If you’re already planning on attending, on the fence about it, or have plans but wish you could be there – here’s what’s in store for our Dying Light launch party tomorrow!

Background on NVIDIA and Ignite

Last September, our friends from NVIDIA, you know, that one company that makes those ultra powerful GeForce graphic cards, tasked us to bring the Game 24 experience to Chicago. It was a world wide celebration of PC gaming that took place in Los Angeles, Shanghai, Stockholm, London, and Chicago. There was a 24-hour stream that featured a Dota 2 tournament, product announcements, world records being set, live PC modding, and much more. We had the privilege to bring part of that celebration to Chicago and it was fun. as. hell. If you missed it, heres how it went:

In the end, everyone had such a good time that NVIDIA challenged us to bring that same experience to the Dying Light launch.

What is Dying Light?

For those that don’t know, NVIDIA works alongside game studios by providing them with tools and software to develop the cutting edge visuals we see in games today. This time they teamed up with Techland, the creators of Dead Island, to bring us Dying Light. If you haven’t played it yet, Dying Light is a first-person action survival game. The game is set in a vast favela-like city called Harran. A mysterious epidemic has ravished the city and you’re sent on a mission to find out the cause of the infection. To survive, you have weapons (which you can scavenge or create) and parkour levels of mobility. Think Assassin’s Creed meets Dead Island caked with some insanely brutal zombie slaying. 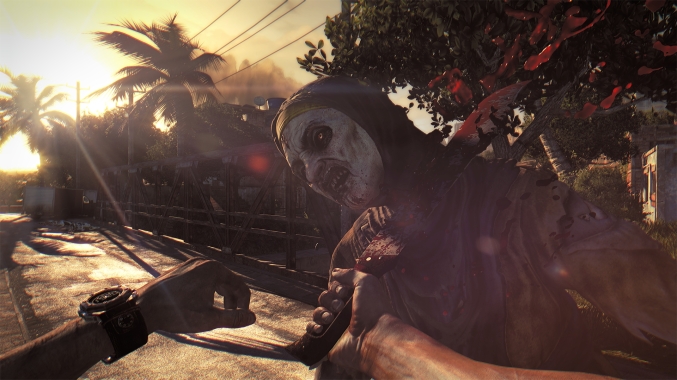 It’s exhilarating, fast paced, and down right fun. Especially since you get to pair up with up to 4 friends to play the story. On top of that, there is a mode where you can play as a zombie Night Hunter and when night falls you can invade players games and wreak havoc. The game is beautiful and the mechanics are smooth. It makes jumping off a zombies head and piercing another zombie with your sword thrilling through and through. We have it on PC and you should totally come try it out.

If there is anytime to try it, tomorrow (February 13th) is the time. The event is going to feature open play PCs, casual competitions, complimentary grub, and swag. All free. The party starts at 6pm and goes till 2am.

You’ll be able to play the game at your own pace, join up with friends to take on the campaign together, or play as a zombie to invade games of players around you. Each time you play you’ll receive a raffle ticket for chances to win tees, mousepads, in-game content, Dying Light games, and one of three GeForce GTX 960’s.

Come out and crush some zombies with us!

The event is free to enter. Complimentary food available whiles supplies lasts. The event will be recorded and all participants will be required to sign a release form. Guests under the age of 18 must be accompanied by an adult.

One thought on “Dying Light Launch Party – What to Expect”