DISCLAIMER: This was an April Fools joke. You can still play all of your favorite games at Ignite, all the time.

Much like Zayn Malik of One Direction, we’ve decided to take our business in a new direction. As of April 2015, we are officially a League Only Lounge.

Since its release in 2009, League of Legends has had a profound impact on our company and as individuals. I for one have committed to this new chapter in our company by growing and maintaining an exact replica of Draven’s mustache.

We’ve taken every step to make sure that  League of Legends is at the core of all of our services and products. From the moment you step in you’ll be greeted by the same fun, helpful staff you’ve grown to love, except this time they’ll be clad in League of Legends attire.

Once seated, you won’t have to waste a minute of your time searching for the game we know you came to play. 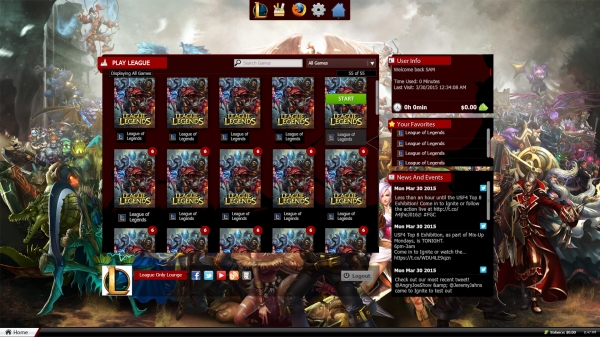 Our most definitive addition to the League Only Lounge is taking the League of Legends experience and bringing it to life on the Xbox One. We worked tirelessly with a small software firm straight out of Bangladesh to let you play from the comfort of a couch.

Play League of Legends on Xbox One, exclusively at the League Only Lounge.

Once you’ve built up an appetite make your way to our Snack Bar where we’ve taken all of our menu items and cleverly renamed them, and thats it.

We are super excited to begin this new journey with you! Share your excitement in the comments below.

13 thoughts on “A New Direction”